GIN at the 47th session of the Human Rights Council, June 2021 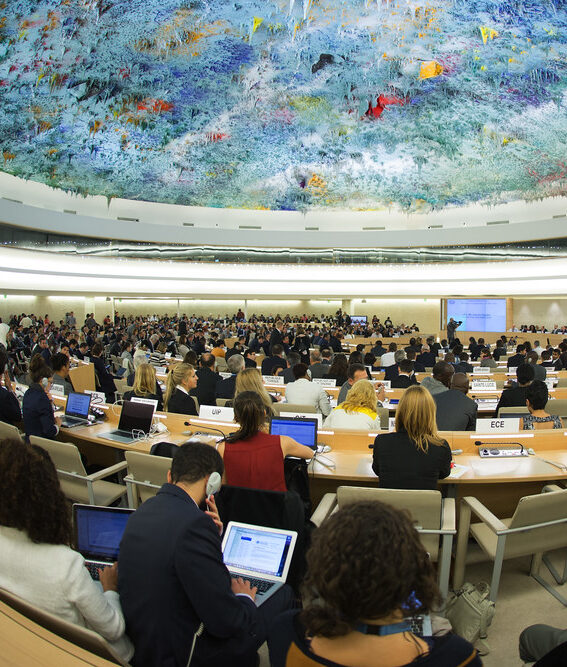 During the latest 47th session  of the HRC, in continuing its UN work and active engagement at the Human Rights Council, GIN was involved in 3 different side events, and intervened in 5 interactive dialogues of 5 UN Special Rapporteurs with 5 members of GIN who spoke during sessions.

GIN-SSOGIE was involved in multiple side events. GIN-SSOGIE organized an online side event “Using Faith and Tradition to support an inclusive understanding of Gender and Sexuality” on the 8th July 2021. This side event was tailored to feature stories and projects from around the world celebrating diversity, love, and inclusion by centering the voices of marginalized people, predominantly from the Global South and East, who represent pre-colonial cultural and contemporary religious traditions and contexts that are inclusive and affirming of broader understandings of gender and sexuality. The event also reached the international community, including governments, UN agencies, civil society organizations, and faith leaders, with the intent to unpack the ‘anti-gender’ discourse and offer insight into the effects that this neo-colonial discourse is having on global understandings of gender and sexuality. 5 speakers were engaged as panelists from the  Metropolitan Community Churches in Brazil, the Coalition of Sexual and Bodily Rights in Muslim Societies in Indonesia, the European Forum of LGBT Christian Groups in Russia, Gender Dynamix in South Africa and Rainbow Pride Foundation in Fiji. Our esteemed Co-Sponsors were the delegations of Canada and Uruguay to the UN. The event received 150+ online registrants.

The link to the Event Recording: https://youtu.be/DiJ8tanwW70

Side event on “An epidemic of violence; Defending the lives of Transgender Women”

GIN proudly took part in another side event on June 23rd. The event set out to discuss issues of transgender women given the global epidemic of violence against them. It discussed anti-transgender stigma, the fact that “denial of opportunity and intersecting vulnerabilities compound to create culture of violence targeting transgender women” and sought to “provide ways to directly make societies safer places for transgender persons”.

ID on High Commissioner’s Report on State response to pandemics

“Some faith communities still exclude LGBTI+ people, including Muslim and Christian communities targeting trans people specifically. This is deeply problematic, more so during a pandemic making people even more vulnerable.”

For the opening statement, first on the HRC agenda, our Board Member, Sanjay Sharma delivered a speech in response to the report of the Office of the UN High Commissioner on the central role of the State in responding to pandemics and other health emergencies, urging for further actions for LGBTI+ people, including trans women who have faced increased discrimination and violence during the pandemic within society and religious communities. LGBTIQ+ people, including trans women, in Nepal and South East Asia, have been deeply impacted by the pandemic: unemployment is on the rise, mental health issues are another concern with increased cases of anxiety & depression. This has also been enhanced by discriminatory and violent living situations, forcing individuals to leave their homes and communities. In a call to an act of human solidarity, the statement appealed to the High Commissioner to invest in programs that are not one size fits all; and to recognize people’s specific needs.

The link to the Statement: https://www.youtube.com/watch?v=j2yNbccujwc&feature=youtu.be

ID with Independent Expert on Sexual Orientation and Gender Identity

“In my country, Pride events organized by the LGBT Christian community were attacked by far-right groups. The concept of family defined by legislators is erasing existing rainbow families, and the introduction of Article 33 ended the legal recognition of transgender people. The latest legal development is the passing of a law which bans school from talking of LGBT matters, falsely but deliberately conflating pedophilia with LGBT people. The political discourse around LGBT rights has become increasingly hostile in Hungary as well as in the Eastern-Central European region.’’

During the interactive dialogue with the Independent Expert on Sexual Orientation and Gender Identity, Judit Gyarfas, a theologian from Hungary speaking on behalf of GIN in a statement, highlighted  religious fundamentalism and the tone withwhich gender ideologies are used to promote discrimination, hatred and hostility in the context of Hungary and Eastern Europe where protection rights are affected.

The link to the Statement: https://youtu.be/P7fgLrH_bdM

ID with Special Rapporteur on discrimination against Women

“The world’s awareness about the health needs and human rights of intersex women does notallow most of them to be protected from physical and sexual violence.”

For the interactive dialogue of the Special Rapporteur on discrimination against women, our GIN member Small Luk, an Intersex activist of faith from Hong Kong, discussed issues around the health rights of Intersex women, addressing violations faced in the health sector and speaking to reports of sexual harassment and violence faced by Intersex women. The statement sought to address the issue of sexual and reproductive rights specific to intersex women. She urged the council “to legally and in practice protect intersex women from rape and violence”.

The link to the Statement: https://youtu.be/lTQDg4Q3h0w

“Human rights are indivisible and these mutually enforcing rights should not be divided based solely on the interpretation of the few. We call on the Human Rights Council to ensure social protection flows from a rights-based perspective for all citizens regardless of social class, sexual orientation, gender identity or health status. This will go a long way in strengthening social protection systems that will significantly contribute to the eradication of poverty and reducing inequalities within our societies.”

For the interactive dialogue of the Special Rapporteur on extreme poverty, GIN presented a statement delivered by Uchenna Samuel Ngene, a gay person of faith from Nigeria and member of GIN. Speakingto the Special Rapporteur’s report, he underlined the extent to which social protection measures are often temporaryl and leave out a number of minority groups, with inadequate levels of protection within fundamentalist communities; particularly in the African region. As a result, many individuals have been victims of joblessness, homelessness and discriminatory healthcare services.

The link to the Statement: https://youtu.be/kKE_BA_X9c0

ID of Special Rapporteur on Freedom of Opinion/Expression

“The recent report by the Observatory on the Universality of Rights highlights manipulation of religion, culture and tradition, and co-optation of human rights language, as key tactics used by anti-rights actors to bolster their power, control bodies and impose a social order that privileges some at the expense of others. Disinformation is used to generate moral panic and assert that certain groups of people are a threat.”

During the ID for the Special Rapporteur on Freedom of Opinion and Expression, GIN prepared a joint statement with the Association for Women’s Rights in Development (AWID) and delivered it on behalf of 3 other organizations including COC Nederlands, Akahata and SRI. The joint statement spoke to the exploitation of the pandemic by some state actors leading to ill treatment that discredits women and LGBTIQ activists. The statement was delivered by Toni Kruger-Ayebazibwe, Executive Director of GIN, who urged the United Nations to protect, respect and fulfill the right to freedom of expression and opinion.

The link to the Statement: https://youtu.be/Ppk7MbP6r9A

General discussion on the rights of indigenous women and girls

During the HRC 47, GIN also had the opportunity to follow the virtual day of general discussion on the rights of indigenous women and girls, organized by the Committee on the Elimination of Discrimination against Women. Relying on its expertise, GIN provided a written submission to the Committee. The submission is guided by an intersectional approach that incorporates the multiple sources of discrimination that create the substantively distinct life experiences of LBTI indigenous women and girls.

Furthermore, the submission also supportedILGA World’s contribution to the Committee and was used to create the joint statement which was delivered on behalf of GIN and ILGA world during the general discussion.

GIN also supported the event led by our partners, the Association for Women’s Rights in Development (AWID). “Rights at Risk: Time for Action”; a dialogue on rights related to gender and sexuality in human rights systems. The event explored strategies helping to strengthen a resilient collective resistance and provided a  guide to actions to help to overturn anti-right actors’ persistent co-optation of faith and tradition.

GIN will be organising further activities during the next Human Rights Council session in September, including an event on “Reclaiming Families and Traditional Values around the world”. More updates coming soon on our social media and website!