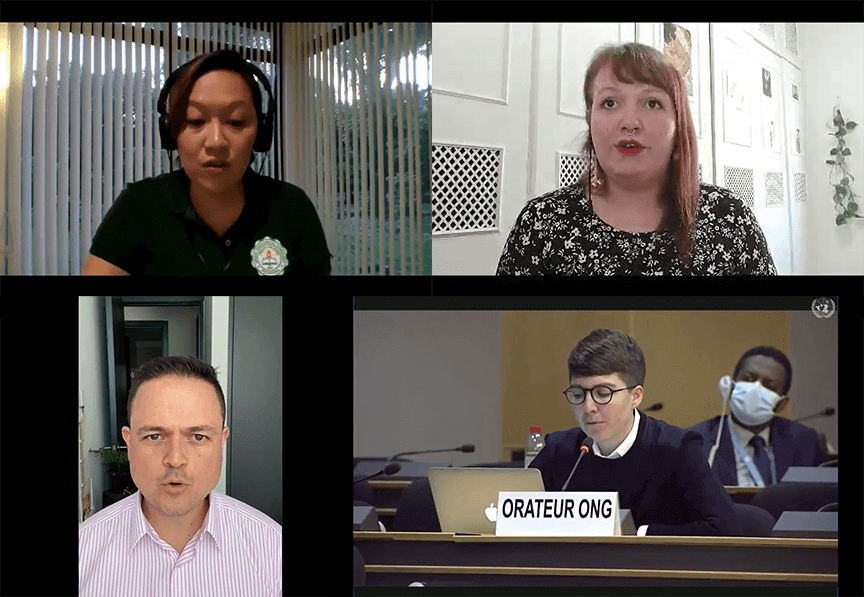 Further, the Council is composed of 47 Member States elected by the United Nations General Assembly. The Human Rights Council holds three sessions a year, for a total of at least ten weeks. They take place in March (four weeks), June (three weeks) and September (three weeks).

Each regular session systematically follows an agenda structured into ten items during which UN Special rapporteurs present reports on their specific thematic. To discuss these items a general debate is held. This is a relatively open discussion format during which topics related to the agenda item can be raised. This is followed by interactive dialogues, which are discussions that allow States an exchange of views and questions/answers. In addition to the general debates, other events take place during these sessions. NGOs can interact with HRC and participate during debates on the basis of having an ECOSOC status. Such statuses can be “shared” to organizations which do not (yet) hold them, and within rather strict guidelines. GIN applied for ECOSOC status in 2018. As it is still waiting to hear back from the process, GIN relies on key partners to engage in the UN space.

GIN has been involved with the HRC since January 2017. GIN was able to access the sessions initially through participation in consultations and the Human Rights Council in 2017 and gradually through more active participation through the holding of side events and participation in official UN meetings (late 2017 to present). All this has been done thanks to our partners who have placed their trust in us. We can cite COC, ILGA World, RFSL, International Fellowship of Reconciliation.

During the latest, 44th session of the HRC, GIN intervened in 4 interactive dialogues of 4 different UN Special Rapporteurs. 4 members of GIN (including 1 staff member) were able to speak during sessions regarding :

– The human rights situation in the Philippines.
– Discrimination against women and girls.
– Rights to Freedom of Peaceful assembly and association.
– Extreme Poverty and Human Rights.

On June 30, during the interactive dialogue on the human rights situation in the Philippines, our board member Rev. Kakay Pamaran presented the critical situation in Manila (Philippines) in relation to the police violence during the time of COVID 19 and the arrest of 20 human rights defenders. She also stressed the urgent need to put an end to the violation of human rights through the implementation of anti-terrorist laws which are contrary to the Human Rights Charter.

The link to the statement: https://youtu.be/CHsZbG-ZotY

On July 7, during the interactive dialogue on extreme poverty and human rights, our member Angelica Tostes from Brazil, in collaboration with Ana Ester, other GIN member, highlighted the impact of the situation created by COVID 19 on LGBTI people in Brazil. Through this statement she called on the HRC to stop the human rights violations against sexual minorities in Brazil but also to help create a world where everyone has the right to live their sexuality and faith freely including within faith communities.

The link to the statement: https://youtu.be/1L8ZJ90Ef1s

On the same day, but this time during the interactive dialogue on discrimination against women and girls, our staff member Simon Petitjean on behalf of our member Rev. Alexya Salvador from Brazil (put the link to the member’s presentation if it exists – website to be updated) stressed the importance of including trans women when talking about discrimination against women, including in the workplace. Adding that trans women are women too and that religions around the world need to stop discriminating and excluding them.

The link to the statement: https://youtu.be/_gv1CcC6g4w

The last statement was made by our member Fidel Ramirez from Colombia with our Board member Ishmael Bahati from Kenya on July 10th. Due to lack of time, this statement was not shown during the interactive debate on the right to freedom and peaceful assembly and association. However, the statement was officially presented to the UN and is now available on our YouTube channel (link). This was a very important statement bringing to light the situation in Kenya and Colombia. Indeed, because of the situation created by COVID 19, police violence and arbitrary arrests have become more and more numerous. The same situation is found both in Colombia and Kenya where the population is witnessing high levels of police brutality to enforce ceasefires and curfews under the new rules to deal with the current pandemic. Through this statement Fidel Ramirez and Ishmael Bahati on behalf of LGBT people of faith called on the HRC to help bring an end to this situation.

The link to the statement: https://youtu.be/jp5Ol1P3Nd0