In March GIN-SSOGIE Secretariat received an invite for one of its programme managers, Pierre Buckley to participate as a panellist at the 3rd SAWIP LGBTI Human Rights Dialogue that took place on the 28th March at The Other Foundation in Johannesburg, South Africa.

The US Embassy South Africa in collaboration with the South Africa-Washington International Program (SAWIP), has been convening themed dialogues with the aim of engaging young people in important conversations. They launched these with a dialogue on the 4th Industrial revolution in partnership with Accenture in November 2017, and a second one on Social Justice Philanthropy in partnership with the Social Justice Initiative on 1 March 2018. In observing Human Rights month, they partnered with The Other Foundation to convene a third dialogue on Wednesday 28 March, to look at the broad topic of Human Rights of the LGBTIQ community, with a focus on South Africa’s regional advocacy responsibility.

This concept came about through a 2016 publication funded by the Other Foundation, Mark Gevisser asserts that “How our societies treat lesbian, gay, bisexual, transgender and intersex (LGBTI) people is symptomatic of the dangers facing all people who are excluded in some way or another in our societies, by those who have a grip on social, economic, and political power.” In that same year, South Africa had abstained from a vote of the Human Right Council to adopt a resolution to appoint an Independent Expert on the protection against violence and discrimination based on sexual orientation and gender identity (South Africa’s position on LGBTI rights has been rather ambiguous and unclear at the level of the UN notably throughout the years).

The backdrop of the discussion was around South Africa’s failure to support measures to protect LGBTIQ individuals from discrimination, assault, and murder, even as a democracy wherein the rights of all are enshrined in a very liberal constitution, has been criticised by many. With this dialogue, they seek to put a spotlight on the role that South Africa – as a significant social, economic and political leader in the southern Africa region and the rest of the continent, and the world (!)- plays in advocating for the human rights of LGBTIQ individuals. They explored the country’s policy standpoint, asked questions about the application of these policies and put a face to the adverse impact of this failure on the victims of violence against LGBTI individuals. They also seeked to learn from other southern African countries that have perhaps been more advanced than South Africa has been and hoped that the panellists would be able to shed light on these matters in a human manner, highlighting the experiences of all. 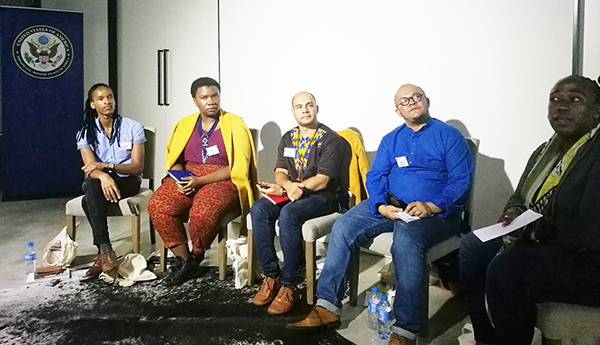 Including Pierre Buckley  from GIN-SSOGIE the panel also incuded Jabu Pereira from Iranti-org a focussed transgender and intersex media documentation and publication organisation, Zolani Metu who is an independent LGBTIQ activist and Lehlogonolo Ditshego from GaySA radio which is Africa’s first and largest online LGBTI radio station. The discussion was attended by funders, LGBTIQ people, human rights activist, LGBTIQ allies, health service providers, media and people of the general public. The discussion was thought provoking in terms of how the South African LGBTIQ movement has evolved and taken a more online response to LGBTIQ challenges that still remain on the ground as well in how South Africa views its lending hand to neighbouring countries in the region. Many people in the audience shared the personal encounters of discrimination in various spaces, some in their homes amongst their families, between their peers, at their places of work, their places of worship, within their cultural practises and in government institutions. There was a clear recognition that South African LGBTIQ people are better off than many of their counterpart countries in the region, but there still remains a lot of backlash and hardship in the lived realities of South African LGBTIQ people, particularly transgender, intersexed and gender non-conforming individuals. Regional organisations shared how they are making every effort to link lived realities on the ground to regional human rights bodies. Pierre shared how GIN-SSOGIE together with its members have formulated affirming and positive messages around the defining of a family through a Johannesburg Declaration https://www.gin-ssogie.org/johannesburg-declaration/ .

There was also a clear push from both the panellist and the audience that participated to recognise that each person had their own pains and agonies to work through, to acknowledge that each person has a hardship and that we are not the only individuals dealing with societal struggles. A lawyer who identified herself as an ally to the LGBTIQ community supported this gesture by explaining how the struggles of woman in society can be linked to those of the LGBTIQ community.

The discussion ended on a high note as many in the room realised the power in their struggle and how they could use this to better the various spaces that they occupy.