GIN, in collaboration with the Church of Sweden has produced two books addressing human sexuality and human dignity from the persepctive of a range of faith traditions, and is in the process of producing a third.

The initial idea for the books arose out of the Uppsala Festival of Theology, which is an event, organised by the Church of Sweden, which has brought together lay and ordained people from across Sweden and many visitors from around the world. It has grown since its inception eight years ago to be a space for lively and engaging discussion, debate and discourse.

The 2015 event, themed Behold, I make all things new, included a number of key streams of which the Human Dignity and Human Sexuality was one that the Church of Sweden International Department engaged in and that involved interfaith dialogue between the three Abrahamic faiths.

With a more than 150-year history in international development work, the Church of Sweden has worked in many interfaith environments. It is clear to us that the protection of human dignity through human rights is a critical element of personal, social, national and international development. Interfaith dialogue becomes a crucial tool to explore together how our different faiths approach important aspects of our being human and of living in community.

Within the Church of Sweden self-awareness and the understanding of human sexuality has been a journey over many decades and to host interfaith dialogue on this topic was indeed a privilege. The dialogue at the Festival of Theology generated so much interest that we decided to present and share its outcomes in the form of an anthology. As such it is intended as a contribution to an evolving conversation about human dignity and human sexuality, as well as a model that could be used for interfaith engagement in this area.

The first book, Behold, I make all things new, was the intial product of that decision in collaboration with GIN. Subsequently a second book, addressing the Karmic faith traditions, I Am Divine, So Are You has been publsihed, and a third book, covering a range of indigenous faith traditions is in preparation. 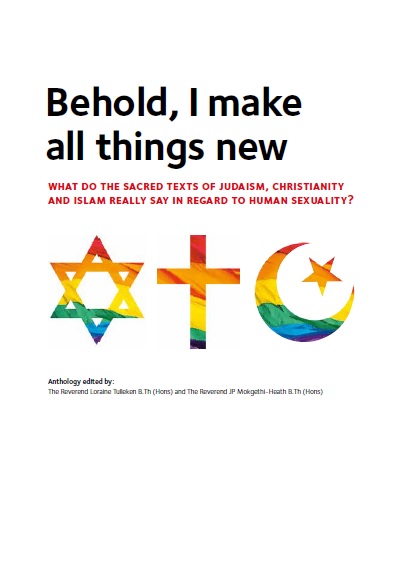 Behold, I make all things new

What do the sacred texts of Judaism, Christianity and Islam really say in regard to human sexuality?

This anthology is an exciting window on how modern Judaic, Christian and Muslim theologians are unpacking the scripture verses most often used to condemn homosexuality. Edited by the Reverend Loraine Tulleken B.Th (Hons) and the Reverend JP Mokgethi-Heath B.TH (Hons). Buy the Kindle version now on Amazon at only $4.59.
Get your copy of the e-book here now.

I Am Divine, So Are You

How Buddhism, Jainism, Sikhism and Hinduism affirm the dignity of queer identities and sexualities

In 2015, a historic panel discussion took place at the global Festival of Theology held in Sweden. Its objective was to examine what the sacred texts of the Abrahamic faiths – Judaism, Christianity and Islam – had to say about human sexuality.
By bringing in perspectives from the Karmic faiths of Buddhism, Jainism, Sikhism and Hinduism, which together represent the beliefs of almost a third of the world’s population, I Am Divine. So Are You expands this conversation between world religions and human sexuality to a truly global level.
The theology of Karmic faiths is revealed at the intersection of scripture, culture, rituals and lived realities. And hence they are dynamic and amenable to a multiplicity of perspectives. They lend themselves more easily to a recognition and acceptance of fluidity in human sexuality. This is a landmark book as it recasts religion – especially Karmic faiths – as an ally and not an adversary of queer emancipation and thus significantly informs the secular and legal movements for LGBTQ rights around the world.

Buy the Kindle version now on Amazon at only $3.19.

Get your copy of the e-book here now.